.
NECK GUARD NO LONGER A WORRY FOR SMITH - Masuri

Steve Smith has added arm guard and neck guard to a list of superstitious requirements after using both in his greatest knock since the Cape Town cheating scandal.

Smith’s 211 at Old Trafford on Thursday, which has put Australia in the box seat to record a victory that would retain the Ashes, was significant in several senses.

The unique batsman’s third double-ton against England came in his first Test back after a delayed concussion caused by a bouncer blow to the neck at Lord’s, where Jofra Archer also hit him on the arm.

The fourth Test was the first match in which Smith used a StemGuard, the clip-on neck protector designed in the aftermath of Phillip Hughes’ tragic death, and he also opted for an arm protector.

Smith’s unique habits at the crease are matched by the oddities that help him get into the batting bubble that England failed to prick in Manchester until Joe Root brought himself on. 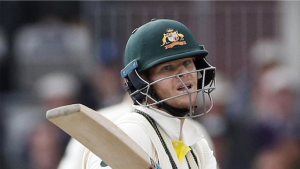 The fourth test was the first match in which Steve Smith has used a neck guard. Image:AP

Smith doesn’t like the sight of shoelaces, so has them taped to his socks, while he uses a fresh set of batting gloves approximately every half an hour.

Neck guards, described by Smith last week as claustrophobic and like being “stuck in an MRI scan machine”, were previously on his blacklist until the nasty scare prompted a rethink.

“I guess I got used to it pretty quick,” the world’s top-ranked batsman admitted.

“I never really gave it a chance in the nets, I’d wear it for 10 balls and if I got out or something I’d say, ‘nah this isn’t working’ and get rid of it.

“I walked in (to the rooms after getting out) and I told the doc ‘the StemGuards are good to stay now and my arm guard’s probably good to stay as well’.

“I got a bit of a laugh from the boys out of that because they know how strange I am … I’m pretty superstitious with different things.”

Smith suggested he noticed the neck guard a couple of times during his marathon innings but it obviously didn’t affect the right-hander based on the freedom in which he scored.

StemGuards aren’t compulsory under Cricket Australia’s concussion and head trauma policy but that is expected to change when it is reviewed next year.