The old and new came together at Edgbaston where the bloodied but unbowed Carey enjoyed a key stand with Steve Smith.

There are situations designed to test your cool: whether you have it, whether you can keep it. Can you put on your sunglasses and not look back at an explosion? Can you fix your hair after screeching your motorbike to a stop on the edge of a rooftop? How do you respond when a rental agency 13 miles on the dark side of Heathrow says that they certainly do have your booking, they just happen to have given away all their cars?

Australian wicketkeeper Alex Carey had a test on Thursday. A fast bowler who comfortably beats the local landmark of 90 miles an hour, trending towards 150 kilometres in new money. An action that whips his pace at you from seemingly nowhere. A ball that leaps from the pitch, through the open window of your bent top elbow as you try to defend, hitting you in the jaw.

If that’s not enough, it knocks your helmet off. The helmet will fall back onto the stumps, the kind of dismissal we’ve seen a few of the scariest fast bowlers effect. In the whirlwind you won’t have any chance to stop it.

Carey responded as he has to every challenge throughout this World Cup: calmly, almost serenely. Within the second after being struck, he left his top hand on the bat to hold it in place and stretched out his other arm to cradle the helmet. Then with no sense of alarm he signalled to the dressing room for medical attention. 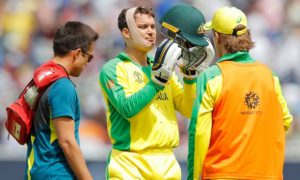 Alex Carey gets patched up after being struck his helmet by a Jofra Archer delivery at Edgbaston. Photograph: Tom Jenkins/The Guardian

Often batsmen who’ve been hit insist they’ll continue. Almost routinely they’re dismissed soon afterwards. It’s no surprise: most of us through mishap or misadventure have known the horrible jarring of a blow to the head, with the creeping effect of shock that settles heavily into muscles after an initial adrenaline burst has subsided. It doesn’t lend itself to finely calibrated actions or split-second decisions.

Carey paused after the initial blow, had seven or eight small stitches in the gash on his chin where the ball had pushed past his grille, and shook his head. Then he got on with the situation at hand.
Advertisement

He was being roughed up by a fast bowler while batting at No 5 for the first time, having been promoted in the batting order to provide stability after impressive performances at No 7. He had been promoted to do a job, and bleeding from the left side of his mouth or being swaddled comically to stop it wasn’t going to stop him.

When Carey was hit, his score was four from five balls. He battled through 11 more overs of pace, including Archer and the equally fast Mark Wood, before he got to face an over of spin. He hit his first boundary off Adil Rashid, then found a couple more in overs to come. He built his score to 46, putting on 103 with Steve Smith, so by the time their stand ended there was something to salvage.

It was the latest effort in a World Cup that has left one impression: Carey the unflappable. Three times when Australia were well short of a defendable total he guided them to one, making 45 against West Indies at Trent Bridge, then 38 not out against England and 71 against New Zealand at Lord’s. There were his fast runs to ice innings against Pakistan and Bangladesh, and his brilliant, fierce, unbeaten 55 in a chase against India that his teammates had made impossible.

Ultimately his semi-final effort was in vain, as this time his fellow batsmen couldn’t cobble together enough and his bowlers couldn’t produce something special to defend it. But it was instructive that Carey’s partner in the rearguard was Smith, who before his suspension was so often the lone hand trying to put out fires. Now he had someone else pitching in.

From the shambles this team was in a few months ago, making a World Cup semi-final was a win for Australia. Established players were a big part of that streak. But the stand between Smith and Carey in their last outing for the tournament was the old and the new coming together, in encouraging signs for the future. It’s been a while since Australian cricket could be confident of having those.